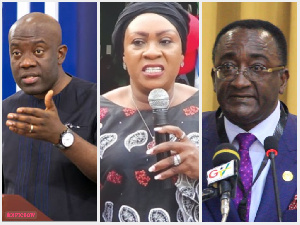 Controversial Mavis Hawa Koomson is now minister-designate for Fisheries and Aquaculture, meaning she could take her oath of office soon – unless the president himself sacks her.

This follows the Parliament of Ghana’s approving of the minister-nominee by 161 secret ballots in her favour (60.67 per cent).

Nominees Dr Owusu Afriyie Akoto and Kojo Oppong-Nkrumah who had earlier been rejected by the Appointments Committee have also been approved by the plenary of parliament and are now ministers-designate.

Announcing the results to parliamentarians, Alban Bagbin, the Speaker of Parliament stated:

“At the end of the votes in respect of the three nominees that were recommended by the Committee on the basis of Majority decision; in the persons of Honourable Dr Owusu Afriyie Akoto, Honourable Mavis Hawa Koomson and Honourable Kojo Oppong Nkrumah, the votes issued were 265 per candidate.”

Bagbin continued: “Now, in respect of Honourable Dr Owusu Afriyie Akoto, the ‘Yes’ votes total 143; the ‘No’, 121. One vote was no indication of choice or the opinion of the person and so, that is considered a spoilt ballot. As a result, the percentage obtained by the Honourable Member is 53.96%. By the Standing Orders, Standing Order 172(8) – a candidate who fails to secure 50% of the votes cast is rejected; in this case, he has secured more than 50 per cent votes and therefore, he has been approved.