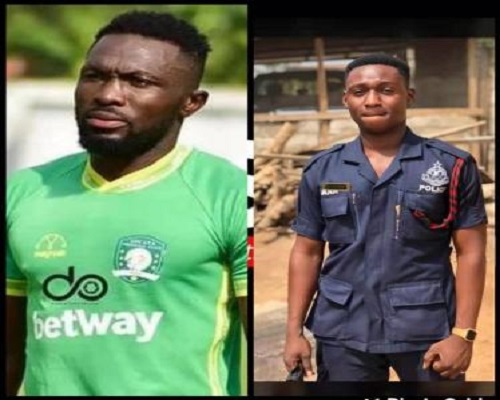 Evans Oppong Communications Manager of Ghana Premier League (GPL) Aduana Stars has said the recent arrest of their player Farouk Adams by the police has led to a decline of morale of the playing body in camp.

Adams was arrested by the police after he allegedly knocked down a police officer with a car on Monday at the Cocoa Station junction between Asutiano and Asuhyaie leading to the death of the police officer.

The defender according to reports did not attend to the police officer but rather ran away and was later arrested after investigations.

He said “the players are dispirited,” adding notwithstanding that the technical team was determined to psyche up the players for their next game with Karela United on Sunday to ensure they pick the three maximum points at stake.

Speaking in an interview with the GNA Sports in Dormaa Ahenkro, he admitted that “it would be a difficult task to psyche up the players towards the big game ahead considering the timing of the accident and the day for the team’s next crucial game”.

“We are left with only three days to the next game. We were supposed to be in training today but we couldn’t.

“Some players of the team, together with the Club’s Operations Officer, Mr. George Gyewu, Mr. Kwadjo Adjei, Supporters Union Chairman, Mr. Ibrahim Muntari, an official of the team and myself were at the Wamfie Police Station to visit Farouk Adams in Police Custody this morning to empathise, and express our unflinching support to him,” he added.

He explained that when they got to the Police Station, some of the Police officers, aggrieved by what had happened approached them and physically assaulted some of them.

“Mr. Kwadjo Adjei aka Kwajogo suffered some slight swell on the neck,” he added.

Mr. Oppong said Farouk Adam’s three-year contract with the Club ended last year thereafter he left for the United States to meet his wife who works there.

“Aduana Stars later reached him again and signed one year contract with him last month which was expected to end next February 22,” he added.

The Communications Officer stated that he was “returning to Dormaa from Sunyani when the tragic accident happened, refuting claims Adams was going to the US to secure a contract with a new Club as being rumoured”.

He said the player was this morning taken to the Wamfie District Hospital in the Dormaa East District to treat an injury he sustained.

Mr. Oppong indicated that he had been arraigned to face trial at the Sunyani High Court this morning.

He described Adams as a gentle, law-abiding, peace-loving, and a person of good behaviour who was known by everyone in the team.

The Police officer, Constable Amos Maatey, 24, was on night duty together with a colleague on Monday.

He sought permission to go and buy mosquito repellent on his motorbike. While returning, he got knocked down and died instantly.

Police later found out the driver of the car was a defender of Aduana Stars, Farouk Adams.

He was arrested and subsequently placed in custody.

The body of the deceased has been deposited at the Dormaa Presbyterian Hospital.

Source: GNA
Related Topics:ADUANASTARS
Up Next