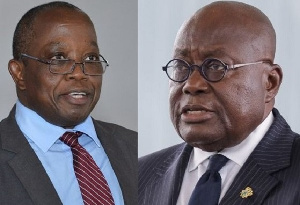 Some Ghanaians have reacted to the retirement of Ghana’s auditor general Mr. Daniel Yaw Domelevo on Twitter with many showering praises on the Former AG for his enormous contribution to the fight against corruption in the country.

Upon resumption of work, after 167days leave, the Auditor General was issued a letter by the president to retire.

In a letter signed by Nana Asante Bediatuo Wednesday, the Secretary to the President said “The attention of the President of the Republic has been drawn to records and documents made available to this Office by the Audit Service, that indicate that your date of birth is June 1, 1960, and that in accordance with article 199 (1) of the Constitution, your date of retirement as Auditor-General was June 1, 2020,” the letter said.

By extension, therefore, “the President is of the view that you have formally left office.”

It added that Johnson Akuamoa-Asiedu will continue to act as Auditor-General until the President appoints a substantive head.

This did not go well for some Ghanaians who expressed their distress on Twitter with some calling on Mr. Domelevo to proceed to the high court.

According to Twitter user Ing. Save Ashes, since Martin Amidu is out and Domelevo is out, Ghana’s fight against corruption has fallen into water.

Read some of the comments as spotted by MyNewsGhana.net below:

Mr. Domelevo, God bless you for looking after the interests of the ordinary Ghanaian.

It cost you your job but you can take pride in that.

I had my concerns after you were appointed late in 2016 but you proved me wrong.

Sorry for judging you even before you took office 🤝pic.twitter.com/kxikU3Ynl9

I hope Domelevo takes the matter to the High Court if indeed he’s not 60 and has been treated unfairly.

Akufo Addo forced Domelevo to go on leave. He served that leave and now it’s time to resume work, the audit service came up with this Togolese nationality issue.
And it took less than a day for the Prez to retire him

Country them dey run am like ibi some personal property…Eii

After Domelevo ‘s fiasco Every government official who is 60 years and above must retire now!! The youth must be employed too🤷🏽‍♂️😡🤬