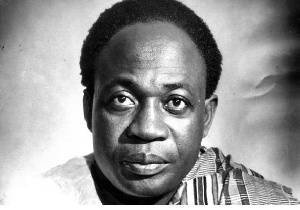 Sekou Nkrumah, one of the three sons of Dr Kwame Nkrumah has revealed that he, Samia, Gamal and Francis were not allowed to view the remains of their father when he was laid in state.

According to Sekou, the ‘sorry’ state of his father’s dead body as a result of cancer he suffered was the reason they were barred from viewing him.

He also described his father’s lifeless body as “almost to the size of a small boy!!!.” when it was laid in state, though he had no view of it personally.

“And when he died in 1972 the kids were not allowed to see the body (only our mother did), because of cancer his body shrank so much, almost to the size of a small boy!!!,” he wrote in a Facebook post sighted by this portal.