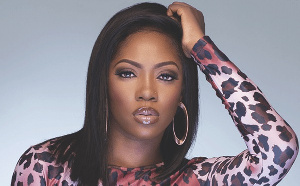 Award-winning Nigerian songstress, Tiwa Savage has revealed that she featured in the remix of a popular track by reggae legend, Bob Marley.

The announcement was followed with appreciation to the family of Bob Marley for giving her the opportunity of a lifetime.

This is arguably one of the most historic collaborations by a Nigerian artist.

Jamaican singer, songwriter, and musician is considered one of the pioneers of reggae. He died in 1981.

Interestingly, the Nigerian singer was not the only one who lent her voice to the remix. Popular Brazillian duo, Tropkillaz, also featured alongside the Malo crooner.

Sharing the news of the remix with music lovers, the Instagram handler of the deceased musician wrote:

“To think that #jamming was a thing of the past… ? The all-new “Jamming” remix by @tropkillaz ft. @tiwasavage and #musicvideo is out everywhere today!”

Fans had mixed reactions to the remix. Others welcomed it while some were not entirely pleased.

Read some comments sighted below:

Akonnordidasthepoet said: “Yes, we are jamming.”

Markdavison said: “I’ll keep Jammin to the original, thanks.”

Audiosoulhealing said: “This animation is incredible.”

Andreyviana7 said: “No! What are you doing with Bob’s legacy?.”

Hippypacifist said: “Jammin was my song when I was a kid but instead of we’re jammin I would say pajamas that’s how my cousin put me to bed. Lol.”

Amerado out with a new song titled Taxi Driver

Lilwin sacks his school headmaster for squandering thousands of cedis