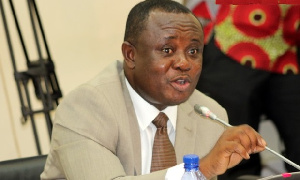 Chairman of the Appointments Committee of Parliament says his committee is not clothed with the power to reject nominees who appear before them for vetting.

According to Joseph Osei-Owusu, the committee’s responsibility is to vet the nominees and make recommendations to the chamber for decisions on them.

The comment comes on the back of reports that Minority Members on the Committee have rejected three nominees including Information Minister Kojo Oppong Nkrumah.

“We are supposed to take a decision as a committee which is intended for the House [Parliament]. Sometimes, people say I am too strict, but truly that is my training and these are the rules we go by. So please let us work as a team and as a committee. We can always agree to disagree that’s why it is a democracy, but we should not take out of here matters which have not been decided by the committee and discuss as if it is a committee decision.”

“This committee has no power to reject anybody and let’s make it clear. Our duty is to make recommendations to the house which the house may accept or refuse. If we understand that, it will influence our decisions,” the Bekwai MP said in Parliament while dismissing the reports of rejection of some nominees.

You were due for retirement in June 2020 – Domelovo told