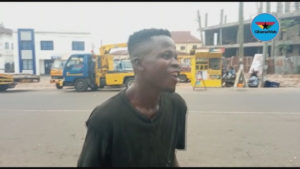 A coconut seller who plies his trade in Koforidua, the Eastern regional capital, has sworn that if the government, led by President Nana Addo Dankwa Akufo-Addo, allows homosexuality to openly operate in Ghana, he would prefer to marry the President.

The young coconut seller held the view that homosexuality is not a thing that the President and his government should ever condone and consider accepting in the country.

“If they (the government) accept it, my name is Akwasi Oppong, I will go and marry Nana Addo. If Nana Addo accepts gayism here, I will go and put a ring on him (marry him),” he said.

He expressed his abhorrence to the issue of homosexuality, indicating that, “A man with his hard buttocks, then you, a man, will say you will marry him. When did you see a male cat having sex with another male cat? That thing should not be allowed here,” he said.

Ghanaweb interviewed some more residents on their views on the issue of legalising homosexuality in Ghana but they all rejected such a call describing it as an abomination for the country.

“We should not condone that thing (homosexuality) here at all. Growing up I never heard my mum telling us two men have mated and delivered a child before. Left with me, the government should reject this thing. Any person caught engaging in this should be arrested and jailed. Personally, I hate it.

“God created sweet women for us. How do you feel when you see a beautiful lady? Why should a man be attracted to another man? We prefer living in poverty than allowing homosexuality here for riches,” a male trader expressed.

Another resident, Afia Boadiwaa, described homosexuality to be evil and should not be entertained in Ghana.

She stated that if the President had gone for a loan from the pro-LGBTQ+ group on the nation’s behalf, he should return it to them.
A footwear dealer also told Ghanaweb that “It is not right for us to allow them to live in Ghana. Because gayism is occultism. It is needless to allow it to be in Ghana. If we allow it, it is corruption we are bringing into Ghana. We don’t like it that way.”

When asked if his stance was not a violation of human rights against LGBTQ+, he said, “We won’t violate anybody’s right. God said we should procreate like the sea sand. Why then should we allow a man to marry a man? How will they procreate?”

Kofi Manu is also a resident of Koforidua who as well shared that Ghana should not agree to homosexuality.

“If Nana Addo Dankwa, our own President, we vote for him, agrees to it then it’s bad.

“Past Presidents did not accept this in Ghana. We voted for you to come so we will have jobs to do. But to bring homosexuality is destruction. If our children learn this thing, it is death that will befall us. It’s bad. We won’t accept. So the government should not accept it here,” he said.

To Abena Serwaa, a resident of Koforidua who sells second hand clothing, curse will befall Ghana if it legalises homosexuality citing Sodom and Gomorrah in the Bible as an example.

She prefers that Ghanaians would die of hunger than the government getting money from pro-LGBTQ+ nations to promote homosexuality in Ghana.

“I appeal to Akufo-Addo to pray well over this and allow the Holy Spirit to work in him. This is a demonic power that is rising and so if he (the president) allows the Holy Spirit work in him, he will overcome it,” Akua Serwaa said.

Previous Be measured in your utterances – Peace Council urges ahead of SC’s verdict on election petition
Next Appointments C’tte rejects Oppong Nkrumah, Hawa Koomson; 22 others approved