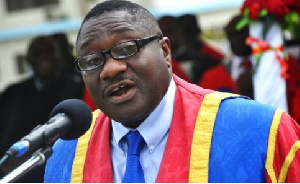 The essence of the appeal was to challenge the procedure for their dismissal. Among the numerous grounds for appeal were the:

a. attacks on the procedure used by the University to dismiss five of the applicants

b. validity of the Governing Council to constitute an Investigative Committee on the dismissed appellants

c. Ag. Vice-Chancellor (VC), at the time, being an unlawful member of the Governing Council could not have constituted an Investigative Committee on them

d. refusal of the Cape Coast High Court to admit into evidence an alleged EOCO report that had vindicated them on their interdiction

These formed the basis for the thirteen (13) grounds of appeal by the applicants.

The Court also held that the grounds identified by the appellants were an unnecessary duplication and that all the grounds could have simply been grouped into two (2): (a) the validity of the Governing Council and the appointment of the Ag. VC (b) breach of natural justice and by extension the admissibility of the purported EOCO Report into evidence

In disposing the matter on the EOCO Report, the Court of Appeal noted that, it was at the dying embers of the case at the High Court, Cape Coast, that Afenyo Markin sought leave of the Court to file an alleged EOCO Report.

Three different reports were filed and their authenticity were successfully challenged leading to their dismissal.

The court, however, established that an appeal is concerned with the procedure used to arrive at the decision and not the substantive matter. The Court, therefore, held that since the report wasn’t part of the procedure and documents used to interdict them, same should not have been entertained by the trial judge at the High Court, in the first place.

The Court averred that the Governing Council of the 1st Respondent University was validly constituted in accord with Act 672 and its appointment of the then Ag. VC was validated by section 10 of Act 672.

The Court of Appeal also held that it was not a must for Rev Fr. Anthony Afful-Broni, then Ag. VC to be appointed by the President of the Republic. In the view of the Court, the Governing Council was seized with authority to appoint, and so long as the President attended his inauguration, it amounted to tacit approval.

It further contended that there is no difference in the exercise of power between a person in an acting and substantive capacity. Therefore, if the person a substantive capacity had the right to interdict, there is nothing that restrains a person in an acting capacity from doing same, and that Pwamang JSC’s dictum in ex-parte University Teachers Association of Ghana (UTAG-UEW), gave validity to the actions of the Ag. VC.

The Court added that if the Ag. VC was validly appointed, then his decisions could not be quashed. Likewise, the decision of the Governing Council validly constituted by virtue of the Ag. VC’s membership cannot be brought for quashing.

In the end, the Appeal Court, Cape Coast, could not establish the breach of certiorari, mandamus, quo-warrato, prohibito and injuncto and dismissed the same.

Delivering its judgement on the Nemo Judex in causa sua (no-one is a judge in his own cause), the court said that the Ag. VC acted in compliance with the University Statute which enjoins him to discipline, therefore, he could not be said to have acted because of his personal interest.

Ruling on the injuncto, the panel said that interdiction is a normal administrative device for checks and nobody can take their right away the 1st Respondent Institution. The Court on quo-warranto held that since Ag. VC was validly appointed; nobody could question the source of his administrative authority.

The court, also in dealing with the question of prohibito, said that the matter before the Court below it (the High Court) was that of interdiction and nothing more, therefore, there was nothing be restrained by prohibition.

The court added that on mandamus, the Governing Council had been established to have been validly constituted and the discipline administered by Rev Fr. Prof. Anthony Afful-Broni was in line with section 10 of Act 672 and statute 36 of the University. Therefore, the mandate of the VC cannot be questioned.

The three-member panel held that the 1st Respondent Institution did not err in its decision in respect of the five dismissed Applicants nor breach natural justice in its actions. The Court accordingly dismissed all thirteen (13) grounds of Appeal in its entirety and, awarded cost of two thousand cedis (2,000) against each of the six (6) applicants to be paid to the 1st respondent.

The bench, off the record, advised the applicants to end the unnecessary litigation.

It would be recalled that on 11th November, 2019, the Cape Coast High Court 2 presided over by Her Ladyship Mills Tetteh ruled in favour of the UEW after the applicants filed a similar application at the Court.

Dissatisfied and angered by the earlier ruling, the applicants filed an appeal at the Court of Appeal, Cape Coast, on 13 grounds. Principal among their reliefs was the reinstatement of five of the applicants.