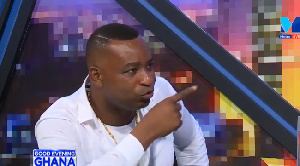 Ashanti Regional Chairman for the New Patriotic Party (NPP), Benard Antwi Boasiako popularly known as Chairman Wontumi has alleged that the leader of the National Democratic Congress John Dramani Mahama is behind the acquisition of an office building for LGBTQ+ advocates in the country.

He also alleged that Policy Think Tank, IMANI Africa is also part of a contractual agreement to push the LGBTQ+ agenda in Ghana.

He says John Dramani Mahama agreed to support the advocacy group because of the money involved in the deal.

Chairman Wontumi made this known when he spoke on Kumasi-based Wontumi TV’s Nsempa Fie on Saturday.

“I have information that John Dramani Mahama is the face behind people advocating for gay rights in the country. I’m told that he took the contract because of the money involved and he is sponsoring these people to advocate for it to be legalized. I also have information that IMANI Africa is also part of those who took the money,” he said.

The Ashanti Regional Chairman of the NPP indicated that homosexuality is not acceptable in Ghana and the people of Ghana will reject it with all their might.