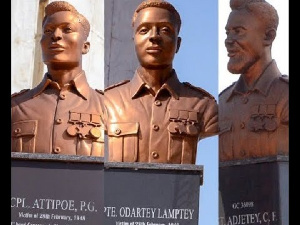 In his 24th address on the coronavirus pandemic, President Nana Addo Dankwa Akufo-Addo spared a minute for the remembrance of the three World War II veterans who were killed in a shootout with the colonial government in 1948.

The incident which according to some historians was the final straw in the fight for independence led to the killing of Sergeant Adjetey, Corporal Attipoe, and Private Odartey Lamptey.

The killing of the three ex-servicemen triggered what has come to be known as the 1948 Riot which led to the arrest of the Big Six and culminated in a series of events that forced the British to relinquish their control of the country.

In the address delivered on Sunday, February 28, 2021, President Nana Addo Dankwa Akufo-Addo eulogized the ex-servicemen for sacrificing their lives for the collective of the country.

“You are doing so on one of the sacred days of our nation, 28th February, when the 1948 Christiansborg Crossroads shooting occurred seventy-three (73) years ago which led to the martyrdom of Sergeant Adjetey, Corporal Attipoe, and Private Odartey Lamptey; martyrdoms that ignited the nationalist movement and led us to the freedom we enjoy today.”

“Let us observe a moment’s silence in honour of their memory, and the memory of all the faithful departed patriots who helped create our nation. May their souls rest in perfect peace,” he said.