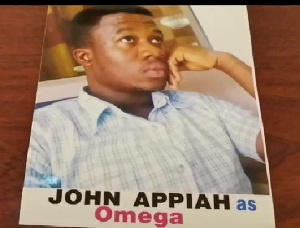 A recent Senior High School graduate, John Appiah alias Omega who was named by Police as leader of a team of robbers who attacked an ambulance and killed the driver while sexually molested a female paramedic still remains on the run.

The said John Appiah is believed to have turned off his phones and gone underground after his images went viral as the ring leader of the armed robbers five of whom have already been arrested.

The Ashanti Region Police Command continues to mount a manhunt for John Appiah popularly known as Omega over his notorious activities in the region.

According to the police, the 22-year-old Senior High School graduate is known for organising and leading criminal activities leaving fatal casualties in its wake.

Notable crimes Omega is reported to have committed include the attack on a bullion van at Asokwa Junction in the Adansi Fomena District in January 2021, where the robbery led to the death of Lance Corporal Martin Babah, the police officer escorting the van, making away with an amount to the tune of GHC500,000.

He is believed to have completed SHS as recently as 2018.