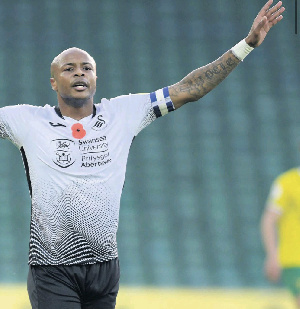 Andre Ayew has scored his tenth goal of the season to put Swansea City ahead against Bristol City in the English Championship.

The goal is his first since his opener against Norwich and brings an end to a run of four games without a goal.

Ayew converted from the spot to send the Liberty Stadium side into the lead after the hour mark.

The Ghana captain has come under pressure following his recent drought but fans are confident he will return to his prolific scoring form knowing the quality the ex-Marseille star posses and believe he could lead them to a return to the Premier league.

Last season, the Welsh side came close to gaining promotion after reaching the playoffs thanks to Andre Ayew goals for the club.

He has been the go-to man for the promotion chasers in the last two seasons.

Promotion rivals Watford and Brentford have also drawing their games this afternoon.