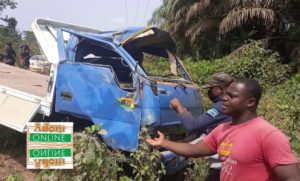 At least three people, including a Fire Service officer, have died while several others are injured in a fatal accident involving a KIA Mighty truck.

The victims were on their way to a funeral at Assin Mesere Nyarme, a farming community.

The incident happened on the Assin Nyankomasi road in the Central Region.

The body of the deceased have been deposited at the morgue while the injured are receiving treatment.

Adom News’ Alfred Amoh reported on Adom FM’s Midday News that the mourners were parked in the bucket of the truck.

Reports say on their way to Assin Mesere Nyarme, the driver lost control of the steering wheel and landed in a bush.

A hearse containing the body of the man whose funeral the mourners were attending also arrived at the accident spot later.

All the occupants, including the driver, sustained serious injuries and were rushed to St Francis Hospital for treatment.