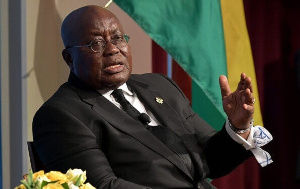 I did not order closure of LGBTQ+ office – Akufo-Addo

News reports have it that President Nana Addo Dankwa Akufo-Addo ordered for the closure of the new Lesbian, Gay, Bisexual, Transgender, and Queer Individuals (LGBTQ+) office in Accra.

On February 2, 2021, a tweet from @LGBTRightsGhana showed photos of the opening of the LGBTI office in Accra.

At the time, while it was unclear where exactly the office was located, or, what the creation of the office aimed to achieve, many calls were made for it to be closed.

Among those strongly advocating against the practice of the LGBTQ+ community in Ghana, is Moses Foh Amoaning, the Executive Secretary of the National Coalition for Proper Human Sexual Rights and Family Values, who has described the acts of this community as a new form of neocolonialism.

In the heat of all that was going on, it was reported by some tabloids that the president had ordered for the closure of the office, information only sourced to Moses Foh Amoaning.

Independent checks by the GhanaWeb Factcheck Desk on the verified official Twitter and Facebook pages of President Nana Addo Dankwa Akufo-Addo give no indication of any such order.

And this is particularly important because, as is the practice, the president would usually use those mediums, beyond the traditional media, to share information of this nature with the rest of the country.

Besides, checks from the verified official page of the Director of Communication at the Presidency, Eugene Arhin’s page, does not also show any such communication from the presidency, except for the only reference from Moses Foh Amoaning as he made it on Accra-based radio station, Joy FM.

On Wednesday, February 24, 2021, in the company of Dr. Daniel Asenso Gyambibi, the landlord of the edifice that was turned into the LGBTQ+ office in Accra, police and National Security officials in mufti stormed the alleged LGBTQ+ premises at Kwabenya and ordered all operations and activities to cease with immediate effect.

The office was eventually closed.

While there was an undoubtedly loud and unrelenting call for the closure of the office, with other calls for the diplomats involved in the establishment of the office to be summoned by the president, there is no fact to support the above claim.

It is the conclusion of the GhanaWeb Factcheck Desk that this claim is FALSE and does not appear to be coming from an authentic source, particularly when this source is not an official mouthpiece of the personality at the center of the claim.

Previous Kwadwo Safo Jnr. flaunts cars at his mansion as wife surprises him on birthday
Next BoG Unveils Sandbox Pilot