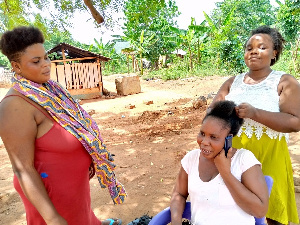 ‘Come and marry us’ – Rural women to Ghanaian men

It appears the villages and rural settings are the last places most men from the urban areas, particularly the towns and cities, look to find women of their choice to marry.

Even though some of these young women are married to men within the rural settings, a lot more remain unmarried. They want to get married someday, but of course to men, not really from their communities, but from the big towns and cities.

The demand for marriage was made to GhanaWeb Correspondent who recently visited some of the rural communities.

28-year-old Mamle Kpabitey is working hard on her farm in Ayimersu in the Lower Manya Krobo Municipal of the Eastern Region. She’s stressing out about the fact that the next day, she will turn 29.

I asked why and she responded, “Because I’m still single. I have no boyfriend. I’m under big pressure to get married but no suitable man here”

Mamle is a confident, personable young woman who provides for herself and her only daughter, a 7-year-old from a previous relationship.

Still, she knows that these days, single, rural, uneducated women like her in rural communities may not find their dream men, particularly from the cities and towns – and it stings.

Comfort Kwaku is another of such women at Otrokper in the Upper Manya Krobo District of the Eastern Region.

The 35-year-old single mother of three is still in the searching game for a man to call her husband. Though she concedes men from various social classes approach them, the ultimate goal of those men is not marriage.

“Men do approach us but most of them are not serious, some are even married. There are women here looking for men to marry and so are there women in the cities also looking for same,” she disclosed.

Asked why she believed most men may not prefer to marry from the villages, she said “they think they are in the cities and towns so they don’t want any village girl to come live with them for them to marry them.”

She added: “We are very serious and hardworking even while here [in the village] and we are also very beautiful and we have good character.”

She has only one message for men in the cities and towns, that they will find very quality women in the villages and communities in the rural areas if they ever decided to marry from there.

“I’ll advise Ghanaian men to come to the villages to find wives because there are good women here,” she assured.

Teye Monica is also a mother of three including a set of 4-year-old twins and a 7-year-old boy at Bukunor in the Yilo Krobo District. To her, the rural communities offer far better women than those in the urban areas.

“Women in the rural areas are hardworking, they are very good at house-keeping chores but the women in the towns and cities do not like hard work so as for me, I believe women here are better than those there,” she posited positively.

One stigmatization rural folks including women are saddled with is the perception that they are not enlightened. Irrespective of one’s age or successes, they are forced to live with this stigma for as long as they live in the villages.

But Monica has a proposition, that men who desire to marry from rural communities should be ready and willing to teach them how to live enlightened lives.

“They will learn, you have to teach them. You the man that is enlightened and educated must teach them,” she averred.

27-year-old Abigail Tetteh also lives in Bukunor. She is unmarried but is a proud mother of two children.

“Some of the men think we do not know life but that is far from the truth,” said Abigail disagreeing with the legendary perception of ignorance of her like who have spent all their lives in the rural setting.

Like comfort and Monica she is optimistic men who find rural women to call their wives will forever live to applaud their choices.

“Women here are very modest so they won’t be an economic burden on their husbands. Let the men come and marry us and we’ll make very good wives. Our backgrounds should not deter them at all,” she almost appealed.