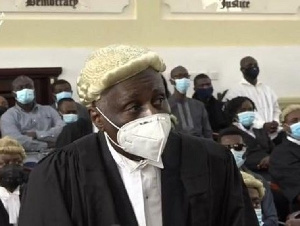 Counsel for the 2nd respondent in the ongoing hearing of the election petition, Mr Akoto Ampaw has asked the Supreme Court to dismiss a review application filed by counsel for the petitioner against the earlier ruling of the court that no witness can be compelled to testify.

The Supreme Court had earlier ruled that the Chair of the Electoral Commission (EC), Jean Adukwei Mensa, and Campaign Director of the New Patriotic Party (NPP) in last year’s elections Peter Mac Manu cannot be compelled to mount the witness box to be cross-examined in the ongoing election petition hearing.

The apex court said this on Thursday, February 11 when delivering its ruling on whether or not Mrs Adukwei Mensa should mount the witness box to be cross-examined.

But the petitioner filed an application for a review of the ruling.

During proceedings in court on Thursday, February 18, Mr Akoto Ampaw argued against the application.

He said “We are opposed to the application for a review and we rely on our affidavit in opposition and statement of case filed on the 17th of February.

“My Lords it is our respectfully view that this application does not appropriately invoke the special review jurisdiction of the court under Article 133 as well as Rule 54 of CI 16.”

“My Lords, we are submitting to this honourable court that this application is a classic case of an aggrieved party who has become emotional by the decision of the court who seeks to re-argue his case through the backdoor of an apparent review application, which it is not,” Mr Ampaw said.

He further told the court that the application does not satisfy the stick conditions that needed to be met.

“This is an abuse of court process,” he told the court.