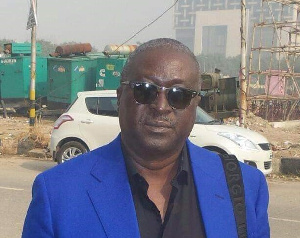 I don’t take Wontumi serious, I won’t respond to his allegations – Alfred Mahama

Alfred Mahama, the elder brother of former President John Dramani Mahama has said he won’t respond to the baseless allegations of the Ashanti Regional Chairman of the New Patriotic Party (NPP) Bernard Antwi-Boasiako popularly called Chairman Wontumi that he (Alfred Mahama) wanted to kill him (Chairman Wontumi) prior to election 2020.

Chairman Wontumi has alleged that prior to the 2020 elections, the NDC wanted to end his life and the task was given to Mr Alfred Mahama.

The vociferous Ashanti Regional Chairman of the NPP alleged that he has a friend in the NDC whose name he gave as Habib and that one day while in his car with Habib, he received a call and because Habib was comfortable to receive the call on the loudspeaker and the person who called was Alfred Mahama who was alerting Habib that some thugs have been sent from Tamale to Kumasi to execute their plan of killing Chairman Wontumi so there was the need for Habib to coordinate so the plan is executed.

But the soft-spoken businessman, Alfred Mahama when reached by Bole based Nkilgi FM to respond to the allegation of Chairman Wontumi simply said; “don’t give it oxygen; I don’t take him serious”.

The same Ashanti Regional NPP, Bernard Antwi-Boasiako in July 2020 described former President John Dramani Mahama’s brother, Alfred Mahama as an “ungrateful” person for speaking against him when he had ‘fed’ him before.

Chairman Wontumi speaking on his Radio station Wontumi Fm in Kumasi said; “You (Alfred Mahama) didn’t have a car when your brother was President. I used to feed you. I have fed you before and you want to talk bad about me?”

But Businessman and Elder Brother of former President John Dramani Mahama, Mr Alfred Mahama has described Chairman Wontumi’s comments that he had ‘fed’ him before as lies.

Speaking to Bole based Nkilgi FM on 16th July, 2020, Mr Alfred Mahama said he has stopped engaging “people who don’t think before talking” and so he has ended the back and forth argument with Wontumi.

But Mr Alfred Mahama stated that; “He (Wuntumi) never fed me when my brother was President and in any case is he still feeding me now that my brother is no longer President of Ghana?”.

Mr Alfred Mahama said; “You people already know me with cars. I had a Landcrusher and discovery Landrover…to him cars are important. We have seen cars since childhood”.

Mr Mahama also asked; “what did he feed me with?”