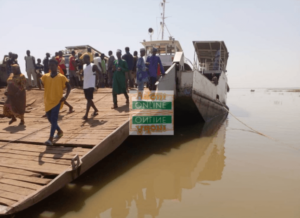 Several attempts to salvage the ferry which has ran aground on the Volta Lake at Ekye Amanfrom in the Kwahu Afram Plains District has been unsuccessful.

Rescuers have become helpless after another Pantoon, Yapei Queen Ferry dispatched from Akosombo failed to pull the stuck ferry.

Scores of passengers and goods got stuck on the lake after the ferry transporting them developed a mechanical fault.

The Pantoon was transporting Cargo and passengers across the lake from Ekye Amanfrom towards Adawso when it broke down on Monday evening after it was hit by a storm.

The passengers were assisted to cross the Lake in Canoes and speed boats.

Spokesperson for the Cargo Transport Drivers Association, Dickson Agyei Danso who spoke to the press said even though the team has been able to offload the goods onto a new ferry, they have been struggling since early morning to tow the grounded ferry.

Previous KATH explains why abandoned maternity block will be demolished
Next Man, 41, impregnates his two stepdaughters at Weija