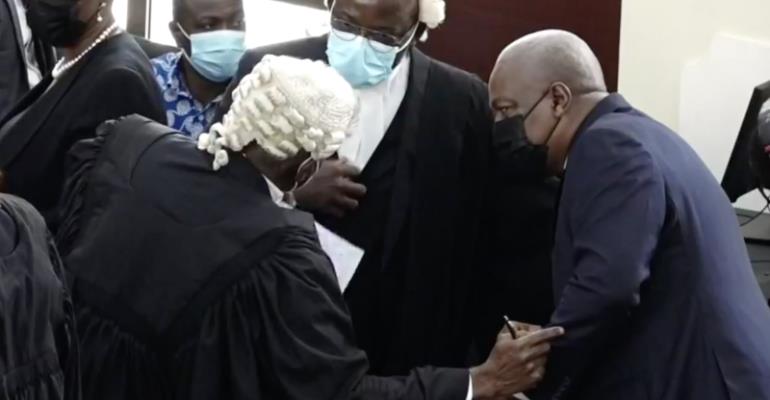 The Supreme Court has, in a unanimous decision, dismissed an application by the 2020 National Democratic Congress presidential candidate that sought leave to reopen his case.

John Dramani Mahama, who is the petitioner, had urged the court to grant his request saying he intends to subpoena Electoral Commission (EC) Chairperson, Mrs Jean Mensa, to testify.

His application follows an earlier ruling by the apex court that it cannot compel a party in a case to adduce evidence if the party does not want to do so.

But arguing his case yesterday, lead counsel for Mr Mahama, Tsatsu Tsikata, said they were taken by surprise when the EC Chairperson opted not to testify after submitting a witness statement, hence the decision to reopen the case and ask for a subpoena.

He insisted that there are also allegations that came up during the cross-examination of their witnesses and these are matters only the EC Chairperson can speak to.

Giving further arguments before the ruling today, Mr Tsikata said he has listed new authorities that will back claims that the Chairperson is an individual and therefore can be subpoenaed.

But this request was opposed by lawyers for the EC and President Nana Akufo-Addo; the 1st and 2nd Respondents in the election petition hearing.

Both sides insisted that the petitioner is simply seeking to use the backdoor to boost a petition he had failed woefully to prove.

The two lawyers further argued that if the quest is to provide new evidence, then Mr Mahama’s team has failed to demonstrate that there is a piece of evidence they can extract from the EC Chairperson with the potential to materially affect how the case is determined.

Backing this stance, Chief Justice Kwasi Anin-Yeboah, who read the ruling, said the petitioner has not indicated how the evidence he intends to solicit from the EC Chairperson will help to determine the case.

Again, the Chief Justice said the petitioner did not decide to close his case just because the EC had filed a witness statement but closed it because he was done with his own argument after the cross-examination of his last witness.

He explained that the discretion to allow a petitioner to reopen a case must not be abused and can only be granted when two grounds have been satisfied.

This includes whether the new evidence will have an influence on the case and if it could have been obtained through due diligence.

Both grounds, he maintained, were not satisfied by the counsel for the petitioner during his oral argument.

The hearing has been adjourned to Wednesday, February 17.