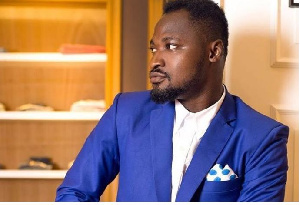 A popular prophet, Prince Elisha Osei Kofi has alleged that the cause of Funny Face’s unending woes is as a result of a bad spell that has been cast on him by one of his colleagues who he once fought with.

According to the prophet, although Funny Face has reconciled with that particular person, the spell cast on him has still not been reversed at the shrine he was sent to.

“Remember I once told you guys to pray for Funny Face and that someone has taken him to the shrine to embarrass him? And that he will run mad and roam the streets? Those things have started to manifest. A celebrity, a very popular person is responsible for all the tribulations Funny Face is going through. He took Funny to a shrine. Even though that person has reconciled with Funny Face, the spell has still not been reversed,” he stated.

In a video that has gone viral on social media, the prophet has called on Ghanaians to intercede for the comedian else his condition will go from bad to worse.

“I want all of us to continue to pray for him. All the things I saw about him have started coming to pass. If we don’t intensify our prayers, we’ll all wake up one day and realize that Funny Face has run mad,” he stated.

During his ordeal with the police, most celebrities including the ones that he had a rough relationship with extended a hand of support.

The likes of Prince David Osei and LilWin, two of Funny Face’s nemesis did not hesitate to throw their weight behind the comedian in his struggling times.

One can recall that in a social media post, LilWin expressed unhappiness about the ill-treatment meted out to the Children’s President by the police while Prince David Osei prayed for his mental health stability.
This was unexpected especially in the case of Prince David Osei because prior to his post on social media, Funny launched scathing attacks on him.

Funny Face accused David Osei of being a hypocrite who is pretending to love him.

In the case of LilWin, his grudge with Funny has been in existence since 2019 based on two main allegations.

The misunderstanding sprang when the Kumawood actor was pained about how Funny Face grabbed the Best Comedy Actor award at the 2019 Ghana Movie Awards claiming he [LilWin] deserved it.

Also, LilWin was alleged to have played a key role in Funny Face and his baby mama, Vanessa’s separation which had a ‘bitter’ aftermath.

Meanwhile, the comedian is currently not on good terms with most of his colleague actors including, Bismark the joke, Kalybos, General Ntatia, and so on.

He has accused the above mentioned as being the cause of his separation from his ‘baby mama’, Vanessa.

VIDEO: Funny Face has been taken to a shrine, kept under a wicked spell by his colleague – Prophet