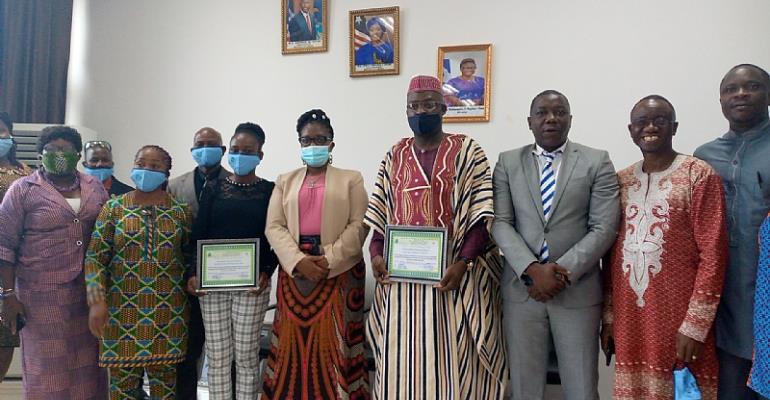 The Ministry of Gender, Children and Social Protection on Monday, February 8, 2021 honored and bid farewell to two volunteers assigned at the Ministry by the Economic Community of West African States (ECOWAS).

The volunteers Madam Bowmanere Monique Elaebi and Mr. Biyama Naphtali Yerima both from Nigeria ended their three (3) years service to Liberia and left behind indelible achievements. According to the Ministry, the volunteers among other things: Championed the first and second draft of the Beijing Declaration and Platform for Action and the Convention on the Elimination of all forms of Discrimination against Women (CEDAW) national reports;

Facilitated in the development of the Liberia 2nd National Action Plan on Women, Peace and Security – 1325, particularly in proposing the implementation structure;

Contributed to design of annual work plan for the department for research, statistics Policy and Planning;

Worked with the technical team of the social development sector to design the Liberian five-year plan;

Provided technical support in the process of the review and adoption of National Gender Policy and Strategic Result Framework for the implementation of NGP;

Served as committee member and contributed on drafting the TOR for collection of department, division in the Ministry of Gender and contributed in reviewing concepts notes on aligning strategic plan with Pro Poor Agenda for Prosperity and Development (PAPD).

“I have sat over the past three years and watched you – and know that you all brought added values to the work of the Ministry, and today – you are leaving behind documentations that are cleared and concised – documents that will go beyond our administration and your names will be on them. Therefore, you are leaving a piece of you behind”, Minister Saydee-Tarr expressed.

“I am happy that you are joining your family back home but I’m sad that you are leaving because, what you brought to the table will definitely be missed”, the grateful Gender Minister opined.

In separate remarks, three Deputy Ministers: Alice Johnson Howard, Parleh D. Harris and Hassan Karneh – Gender, Administration, and Research, Policy & Planning respectively lauded the volunteers for their invaluable contributions to the Ministry and wished them well as they depart Liberia.

The Ministry certificated the volunteers for their tireless services to the Ministry and in particular the Departments of Gender and Research, Policy & Planning.

Madam Bowmanere Monique Elaebi and Mr. Biyama Naphtali Yerima extolled the Ministry of Gender for the support given them as well as the conducive environment that made their work easier.

UPDATE: Ofori-Atta flown to US over COVID complications