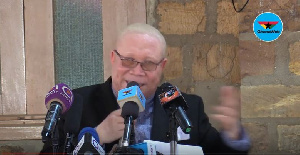 The Executive Secretary of the National Coalition for Proper Human Sexual Rights and Family Values, Moses Foh-Amoaning is calling on the government to close down the newly opened LGBT office in Tesano.

According to him, his coalition is made up of the Christian Council and the Catholic Bishops Conference, the Muslim community as well as the traditional rulers, making it a tripartite coalition fighting this LGBT agenda in Ghana.

Speaking to Nana Yaa Brefo on Angel FM’s morning show, he alluded to the pressure mounted on the late president of Ghana, Prof. John Evans Atta Mills, by the then Prime Minister of the United Kingdom, David Cameron to extend help to Ghana if the country fails to uphold the rights of LGBTs.

Giving the background of this movement, Lawyer Foh-Amoaning said that its formation started in New York City and extended to California and has since spread throughout the world.

He further argued that it is illegality for this movement to open an office in this country as according to him, the laws of this country frowns upon their activities.

Mr. Foh-Amoaning added that there are some media practitioners who are members of this group in this country, including some lawyers, some judges and politicians, some Members of Parliament and some members of the executive arm of government are part of this group.

He stressed that there is clearly what Ghana’s Constitution defines as discriminatory and the LGBT agenda is not one of them.