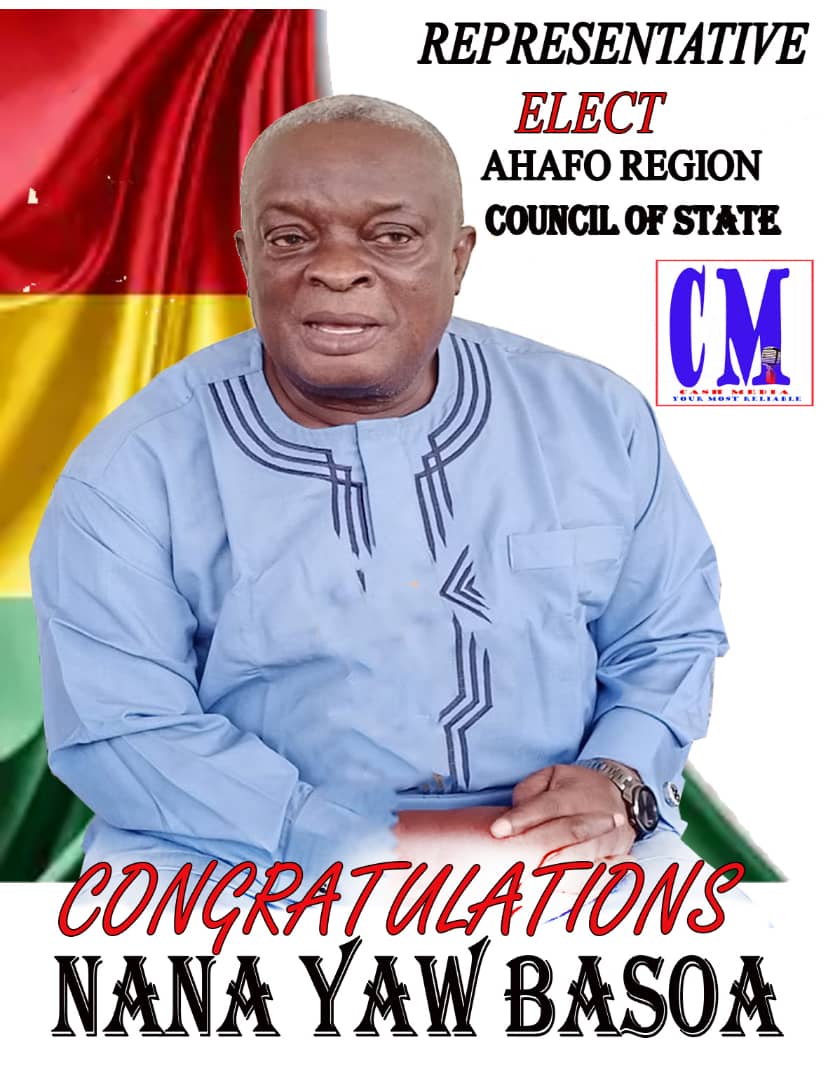 The Ahafo Regional Council of State Elections was one of the keenly contested in the Country. The elections were held today. 12th February 2021 at the Ahafo Regional Coordinating Council,  Goaso, the Regional Capital.
Yaw Basoa, a native of Duayaw Nkwanta who also doubles as chief, Farmer and a Businessman with International commendation won the elections by obtaining Votes 12 Votes out of the 12 delegates.
His other competitors like Akuoko Stephen Kwabena, Kwadwo Owusu Sarpong,  Kwaku Dwomor Kessey, Cecilia Gyan Amoah did not get any vote.  He has been duly declared by the Electoral Commission to represent Ahafo at the Council of State,  who is responsible to advise H. E. Nana Addo Dankwa Akufo- Addo, the president of the Republic of Ghana on national and international issues. Nana Yaw Basoa has made history today as the first person to represent the Ahafo Region at the Council of State since its creation.
In an exclusive interview with Francis Agyapong Nimpong, after the declaration as the winner, he expressed his excitement for winning the election with a wide margin .
Nana Yaw Basoa stated emphatically that, the victory is not for him alone but his competitors, the delegates and the good people of Ahafo Region.
Mr Basoa added that the mandate given to him is for the people, therefore, he shall represent the people of Ahafo very well at the Council of State.
He is poised for development, best representation, unity and prosperity for all.
The outgoing Ahafo Regional Minister,  Evans Opoku Bobie and the incoming minister, George Boakye were seated as well as Dr Gideon Boako, Spokesperson for the Vice President Dr Mahamudu Bawumia.
The MMDCEs in the Ahafo region were also present to witness the historic election which was held at the Ahafo Regional Coordinating Council, Goaso, Ahafo Regional Capital.
At the Eleventh Hour of the elections, Gyambibi Frank, one of the aspirant stepped down for a reason known to himself.
BRIEF PROFILE
Nana Yaw Basoa (Ɔdɛɛfoɔ Ameyaw Basoa) is the Ɔmanhene Korɔankɔhene of Duayaw Nkwanta Traditional Council and happily married with children. He obtained his GCE O’Level certificate at Bechem Presbyterian Secondary School in the year 1972. He did the German Language course in Germany and studied Communication when he later went to America. Nana Yaw Basoa is affable, approachable and very sociable.
He played a pivotal role in the creation of the Ahafo Region.
Source: Thepressradio.com/Francis Agyapong Nimpong
Related Topics:Ahaforegion
Up Next