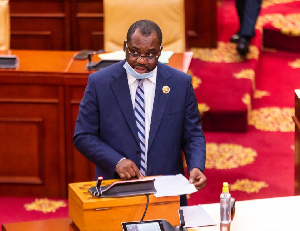 Former Education Minister and now Minister-designate for Energy, Dr. Matthew Opoku Prempeh has retracted and apologized to former President John Dramani Mahama for accusing him of busing people to the Independence Square in 2017, to come and fake a fainting scene during the placements for students into senior high schools.

According to him, he regrets making the comments since he had no evidence to prove them.

Mr. Matthew Opoku Prempeh went viral for his comments on students and parents who collapsed at the Black Star Square in 2017.

He claimed on Asempa FM that former President John Mahama bused people to Independence Square to cause chaos during the exercise and fake collapsing to give the ruling government a bad name.

“We opened the center at the independence square to address the needs of Ghanaians who want to go to school, but some evil people have decided to pay GHc 20 and GHc 50 to people to go there and stage fainting and collapse, yesterday some of the collapses were fake. I’m even wondering why they brought little kids to the centre,” he stated.

He was asked to apologize after making the comments but the nominee refused.

But appearing before the Vetting Committee on Friday, February 12, 2021, the nominee apologized for his comments.

He was confronted by Mr. Samuel Okudzeto Ablakwa the NDC MP for North Tongu if he had evidence to support his claims.

He originally asked if the Chair could produce the former President before the Committee so he will put it to his face so the committee would be able to discover that his (Prempeh’s) claims were true.

But the Chair, Joseph Osei Owusu said he would not be able to produce the former leader hence the nominee should answer the question.

He then responded saying he would have said these things differently if he had the opportunity.

However, Minority Leader Haruna Iddrisu put it to him if he has regretted his action.

When asked if he could prove, he said the information he relied on was not authentic hence he has withdrawn

However, when asked to apologize, he said if those words used, hurt the former president, he would withdraw and apologize.

This was after Alhassan Suhuyini had also raised the same issue.

Ras Mubarak loses Council of State polls with no vote