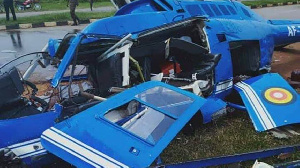 Eyewitnesses said there were two occupants in the helicopter who were rushed to hospital after the accident.

UPDF spokesperson, Brig-Gen Flavia Byekwaso said the helicopter was being piloted by two cadet trainees on a mutual training flight.

“Today afternoon at about 2:15 pm a jet ranger piloted by two cadet trainees on a mutual training flight came down immediately after takeoff near Lido beach. The two were rushed to hospital to ascertain their health. Our aviation team is on ground to investigate the mishap,” UPDF spokesperson, Brig-Gen Byekwaso tweeted.

The development comes just days after the African Union Mission in Somalia (AMISOM) said Sunday that it had launched investigations into circumstances under which its helicopter crashed in southern Somalia injuring four Uganda Peoples Defense Forces (UPDF) soldiers last week.

The AU mission said the four soldiers were rescued when a helicopter on a mission to support its troops in Lower Shabelle region crashed soon after take-off in Balidogle on February 5, 2021.

AMISOM said the helicopter whose registration details were not disclosed belonged to the AU mission’s Aviation Unit from the Uganda People’s Defense Force.

“All four soldiers aboard the helicopter were rescued and are in a stable medical condition,” AMISOM said in a statement issued in Mogadishu.

“Investigations are ongoing to determine the cause of the crash. However, preliminary reports indicate that it was due to a mechanical failure,” the AU mission added.

2,500 Zambians to be compensated by UK miner over water pollution

Pastor Chris reveals why most pastors are poor