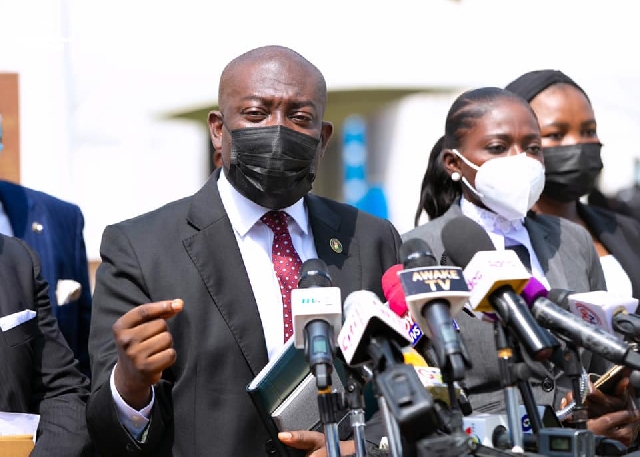 The lawyers for President Nana Akufo-Addo in the ongoing election petition are contemplating subpoenaing former President John Mahama, the petitioner, if his lawyers went ahead to subpoena the Chairperson of the Electoral Commission, Mrs Jean Mensa to testify in the dock.

Mr Mahama’s lawyers have disagreed with the ruling and expressed their intention to file for a review, reopen the case and also subpoena Mrs Mensa into the witness box.

Speaking to journalists after the court ruling on Thursday, Information Minister-designate Kojo Oppong Nkrumah also hinted at the likelihood of the President’s lawyers dragging Mr Mahama into the dock in a tit-for-tat manner.

“Depending on what the court decides to do, our senior lawyers will take their next line of action.

“I don’t know if they will agree to it at the end of the day but it is part of the various conversations”, he said.

The Ofoase Ayirebi MP also accused Mr Mahama of abandoning his own case, explaining that unlike the President’s star witness, who attends court proceedings without fail, Mr Mahama, who is the one challenging the 2020 presidential election results in court, has appeared just twice in court.

“I keep telling you that Chairman Mac Manu comes here every day, prepared that if they [petitioner’s lawyers] cross a threshold and we have to do that [mount the witness box], we’ll do that”.

“But, as you have noticed, unlike the petitioner who, as some of my colleagues have been suggesting, appears to be abandoning the case, because he’s been here twice, we are always here; if it becomes necessary, we’ll be happy to mount the box”, he said.

Speaking about the court’s ruling on Thursday, Mmr Oppong Nkrumah said: “We are of the respectful, humble view that as the court said today, the principle is that you cannot compel a party under these circumstances to adduce evidence”.

He argued that “even if you prove some fresh evidence in extreme circumstances under which your case should be re-opened and then you come with your second application for subpoena; what is that subpoena supposed to achieve? To compel the person that the court has said cannot be compelled to give evidence, the subpoena is now to compel that person to come and give evidence”.

“We think it will be an interesting set of arguments”, he noted, adding: “But, wherever it goes, as we have said: if it becomes necessary that we put witnesses in the box to respond to issues, we are more than happy [to do so]”.

Related Topics:Election Petition
Up Next

Ras Mubarak loses Council of State polls with no vote

NDC is in crisis – Atubiga admits