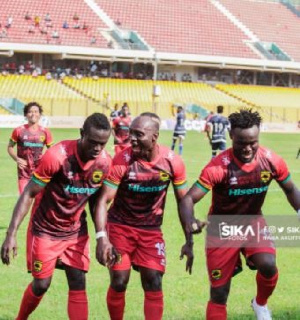 Former Asante Kotoko coach, Didi Dramani, has given some scouting tips on how the team can exploit ES Setif in their upcoming CAF Confederation Cup play-off game.

The two sides face off in the first leg at the Accra Sports Stadium on Sunday 14 February 2021.

Mas Ud-Dramani, currently a first-team coach at Danish side Norsdjaelland said the game is going to be tough for the two sides.

Speaking in an interview with Happy 98.9FM from his base in Denmark with Odiasempa Kwame Oware, he said, “Setif is very consistent in the league this season. They are on top of the league and have lost just one game. They (Setif) are an active and dynamic side and these are two active teams in their right rhythm coming to face each other.”

“Kotoko should be mindful of how they try to play behind the lines. They (Setif) want to play and definitely, it gives Kotoko a chance to also exploit them at the back. Another area Kotoko can exploit is their defensive set-pieces.”

Didi Dramani added that the game is going to be difficult for the two sides and the two teams are currently in form judging from their league performances as Asante Kotoko and Setif are occupying the first spot in their respective leagues.