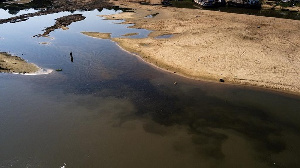 Over 2,500 villagers in Zambia are to be financially compensated by a British mining company for significant water pollution to the region’s waterways.

“Without admission of liability, Vedanta Resources Limited and Konkola Copper Mines Plc confirm that they have agreed, for the benefit of local communities, the settlement of all claims brought against them by Zambian claimants represented by English law firm Leigh Day.”

The claim was brought by the thousands of locals — including 642 children, against Konkola Copper Mines Plc and its parent company, UK-based Vedanta Resources.

Issued in 2015, the claim centered on pollution caused by the Nchanga Copper Mine. A mine that employs 16,000 people in Zambia — the country’s biggest private employer, and sold a controlling share of its company in 2004 to Vedanta which is one of the largest mining companies in the world.

The plaintiffs alleged that the pollution severely impacted the lives and the livelihoods of people living in nearby villages Shimulala, Kakosa, Hippo Pool and Hellen — where the primary source of income is farming and fishing.

It was also claimed that toxic effluent discharge from the mine damaged local land and waterways used for irrigation. As a result, the use of polluted water for drinking, washing and bathing caused severe health problems in residents.

The villagers sought damages, remediation and cessation to the alleged continual pollution that they say is gravely impacting the quality of their lives.

In a landmark ruling, Supreme Court judges ruled in April 2019 that the case could be brought against Vedanta in the English courts because — as the parent company of Konkola, the company arguably owed the villagers a duty of care.

Vedanta had published material asserting its responsibility for the establishment of group-wide environmental control and sustainability standards, and therefore it was decided that the company must be held accountable for such statements.

The Supreme Court agreed with arguments advanced by the plaintiffs that there was a real risk they would not be able to achieve justice in the Zambian courts due to lack of funding and legal expertise available.

It appears that more and more giant international companies are gradually beginning to be held liable for abusive operations in local African communities.

SAD PHOTOS: Radio Presenter Stabbed to Death By His Girlfriend

UPDF helicopter crashes in Entebbe with two cadet trainees onboard