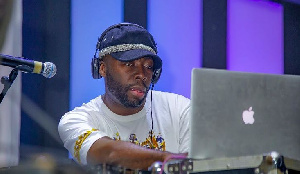 The conduct of Andy Dosty on Hitz FM which eventually led to Okesse1 exiting the studio has engendered conversation on various social media platforms as the public subject the ace radio presenter’s action to scrutiny.

The debate over whether or not Andy Dosty was professional; and whether the circumstance warranted the treatment meted out to Okesse1 is one that cannot be settled in the court of public opinion but the nature of the issue calls for a discussion.

While some have rained insults on Andy Dosty, others have questioned if he would have behaved the same way if Okesse1 were as big as Sarkodie, Shatta Wale, or Stonebwoy. Aside from his demeanor right from the moment Okesse1 sat for the interview, his tone has also been questioned as a section of the public say he [Andy Dosty] was rather rude to the youngster.

On the other hand, some have defended Andy Dosty‘s conduct on condition that the musician behaved untowardly. Their argument is based on the premise that the entire story may not have been captured in the less-than-two-minute video.

A section has also mounted a spirited defense for the celebrated disc jockey, arguing that an artiste should not show up late for an interview and disrespect the host in any way.

What ensued between Andy Dosty and Okesse1?

Okesse1 was ordered to leave the studios of Hitz FM over claims he has been rude. A video of the incident circulating on social media captures a masked up Andy Dosty switching from his panelists to the artiste who was reported to have turned up late for the interview.

“Gentleman, how are you?” asked Andy Dosty to which the musician replied, “I’m good”.

The presenter, unsure of the right pronunciation of the name of the musician sought a clarification but that was followed with a suggestion to the musician who was not audible enough to get close to the microphone.

“Ah, massa, it’s everything okay?” a puzzled Andy Dosty asked – a question a soft-spoken Okese1 seemingly did not get the import as it elicited an “oh, why are you asking that question?” response from the musician.

Unhappy about the responses from Okesse1, Andy Dosty walked the musician out of his studio.

He said: “…you walked into my studio without saying anything, you walked in late, you didn’t say anything to me, you came, you sat down quietly, I asked you whether you’re okay and you say why am I asking you that question? Please, walk out of my studio now.”

Here are a few reactions.

Related Topics:ANDY DOSTY
Up Next

Andy Dosty lays ‘away all arrogance’, apologises to Okesse1