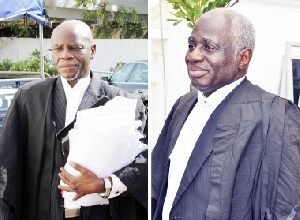 The Supreme Court of Ghana on Tuesday, February 9, heard arguments on whether or not Jean Mensa, Chairperson of the Electoral Commission, should testify and be cross-examined by Counsel for the Petitioner in the Election Petition.

Counsels for the 1st and 2nd Respondents had on Monday closed their case after the Petitioner closed his case.

They argued that the Petitioner had failed to present enough evidence to back his pleadings, and there was no need for their witness to prove otherwise.

But raising an objection, Counsel for the petitioner argued that Jean Mensa cannot evade cross-examination because she had already “elected” to do so by signing various affidavits and statements of truth severally during the trial in which she and the EC refused to “admit facts”, opposed “inspection of documents” and opposed the review application on “interrogatories” with the excuse that the Petitioner would get the chance during cross-examination.

Tsatsu Tsikata argued that among other things, the court gave all those several rulings in the aforementioned applications because the court relied on her argument that “wait”, when we get to cross-examination you will get your chance.

On Tuesday, standing on his fit for about two hours, Tsatsu Tsikata, the Septuagenarian legal luminary referenced that “bridge” several times to great effect.

Justin Amenuvor, Lead Counsel for the 1st Respondent argued that the rules of court namely Order 36 and Order 38(4) of the High Court [Civil Procedure] Rules, C.I. 47 allowed the 1st Respondent the freedom where a party “elects not to” adduce evidence.

Lawyer Amenuvor averred therefore that no one could compel a witness to testify. He maintained his earlier position on Tuesday that it was the duty of the Petitioner to prove the matter before the court.

On his part, Akoto Ampaw, Lead Counsel for 2nd Respondent Nana Addo Dankwa Akufo-Addo, associated himself with the submissions of Counsel for the EC.

He makes reference to the Joseph Aknu-Baffour and two others versus Lawrence Bourco’s case at the Supreme Court, where the court held that “a litigant who is a defendant does not need to prove anything, the plaintiff who took the matter [to court] is the one who must prove”.

He argued that it is only when the defendant (in this case President Akufo-Addo) desires a determination to be made in his favour that he calls a witness.

According to him, the petitioner by law cannot compel the respondent to enter the witness box.

Akoto Ampaw argued further that the Petitioner should be happy with the decision by the Respondents not to call witnesses.

Lead Counsel for the Petitioner, Tsatsu Tsikata, argued that it was in the interest of justice for the Chairperson of the 1st Respondent to be cross-examined.

According to him, the EC boss Jean Mensa who acted as the Returning Officer for the December 7 election is at the heart of the election petition case because she had a constitutional duty to perform, and besides she signed the Answers filed by the EC, the first Respondent in this case.

“By filing its witness statement, the 1st Respondent has crossed the bridge as far as cross-examination is concerned. That ship has already been crossed so she cannot back out now,” Tsatsu Tsikata argued.

“In respect of an answer to our petition, she signed a statement of truth. All these affidavits she signed are before this court already. Undoubtedly, she knows the truth is what will make you free and instead of coming forward as a witness she said no.”

Tsikata in referencing an affidavit filed on January 22, this year, in response to the dismissed review application on “interrogatories” saying,

“In the affidavit filed, the EC said the applicant does not suffer any injury at all to his right if the court dismisses the case as he still has the opportunity to ask questions if he so wishes during cross-examination.”

Tsikata further referenced paragraphs of the EC’s affidavit to the court saying, “Affidavit to the motion in response to the stay of proceedings filed — the EC again said the petitioner does not suffer any injury at all because the applicant will still get the opportunity to cross-examine her.”

All these affidavits filed in response to the petitioner, Tsatsu Tsikata argued, reassured the petitioner that the EC chairperson, by all means, had “elected” to stand as a witness. He also stressed severally going back to his introductory notes he delivered in the morning that this was not a case whereby the first respondent was withdrawing their witness statement, in which case the petitioner could have had the option of applying for a subpoena to compel her to testify.

He advised the first respondent that they should make it clear to the court if they intend to withdraw their witness statement.

The court will rule over the legal arguments by counsels for the Petitioner and the 1st and 2nd Respondents on their respective cases on Thursday, February 11, 2021.

One killed in accident at Nsawam

HOT VIDEO: Soldier battles for life as 6 policemen gang up and beat him to a pulp in Cape Coast