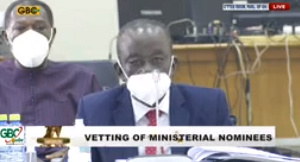 The President’s nominee for the Minister of National Security, Albert Kan-Dapaah is before Parliament’s Appointment Committee.

Mr Kan-Dapaah who has been renominated for the position by President Nana Addo Dankwa Akufo Addo is being vetted by the Committee in fulfillment of requirements in the 1992 Constitution.

The National Security Nominee is the second person to be vetted out of 46 nominees submitted by the president to Parliament.

Of the number, 16 are Regional Minister nominees’ whiles 46 are designated for the various ministerial portfolios.

Mr Kan-Dapaah’s vetting is expected to be one of the high points of the process as members are highly expected to question him on the several incidences of security implications that have taken place in the country over the last four years.

The Appointment Committee’s vetting on Mr Kan-Dapaah below: