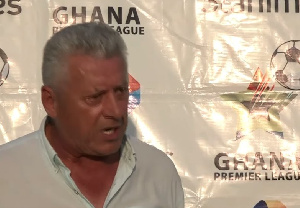 Accra Hearts of Oak head coach Kosta Papic has said despite his side’s struggles in recent games they are a better side than Kumasi Asante Kotoko.

According to the Serbian tactician, his outfit is playing better but have just lacked goals.

“I don’t think Kotoko is playing better than Hearts of Oak at the moment.

“We are playing good football but just lacking the goals,” he told Nhyira FM in an interview.

GPL Wk 13: Karela United vs Asante Kotoko is the pick of Matchday 13 among some top liners FEBRUARY 6, 2021

Since taking over as head coach of Accra Hearts of Oak, Kosta Papic has played 11 games, won 4, drew 4 and lost 3.

His biggest win was the 6-1 thumping of Bechem United who were unbeaten at that time and the 2-0 defeat at home to Great Olympics is obviously one that fans of the Phobians will never forget.

They currently lie 9th on the league log with 17 points.

Asante Kotoko have in the same period of time won 6, drawn 3 and lost 2.