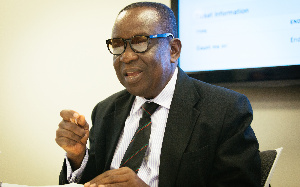 The President’s nominee for the Minister of National Security, Albert Kan-Dapaah has revealed the identity of the individual who ordered the invasion of armed military men in parliament chamber of January 7, 2021.

According to Kan-Dapaah a commander whose name he did not mention instructed the armed men to invade parliament when he noticed things were getting out of hands in the chamber.

Kan-Dapaah adds that the armed men were instructed to go in to restore order by the commander due to the scuffle that erupted in the chamber during the election of the leadership of the 8th parliament.

He said military commander took such action on his own volition without seeking any advice from anyone.

“…It is a strange thing when you have a military team invade the parliamentary chamber. For whatever reason when I saw it, I was also alarmed and my colleagues in government were alarmed that it had happened. So, I did take the trouble to find out how it happened. It was that simple, somebody, a commander in his opinion thought that things were getting out of hand in the chamber and that he needed to go there to try to restore order,” he revealed

… So, I asked why? And what was his motivation for going there? I can only say this is something that shouldn’t have happened but no hard was caused to any member of parliament and let me agree with you that going forward this is not something we should encourage and hope that it doesn’t happen again.” He added.

He said the case has been referred to the Chief of Defence Staff for appropriate action to be taken.