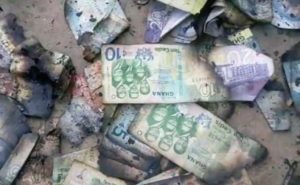 Fire has gutted a 4-bedroom house at Anoma, a suburb of Wenchi in the Bono Region destroying property estimated at several thousands of Ghana cedis including cash .

Asana Nakonyor, one of the fire victims told Nana Anfreh Damanta MyNewsGh.com’s reporter in the area that she has lost almost everything in her room, including 60 pieces of clothes, expensive cooking utensils, cash of GHS2, 500.00 among others.

Abu Moro a driver who lost his cash of GH¢3,400 and other personal effects in the fire outbreak said one of the tenants said he and his wife had also lost GH¢4, 900.

“A young boy staying behind our house came to my work place to tell me that our house was up in flames before a colleague tenant called to confirm what was happening”.

“I am a driver so I was at the station when the incident occurred. When I got the information, I quickly called Fire Service personnel and they swiftly responded”, Moro revealed

According to him by the time the Fire Service Personnel had reported to the scene, the fire had gutted the house and their belongings.

Divisional Officer III Mr. Eric Boateng who is the Wenchi Municipal Commander of the Ghana National Fire Service said his outfit is currently investigating the incident.

He cautioned residents to be careful with naked fire in this dry season, explaining that his outfit has recorded a total of 6 fire incidents this year alone.

One killed in accident at Nsawam