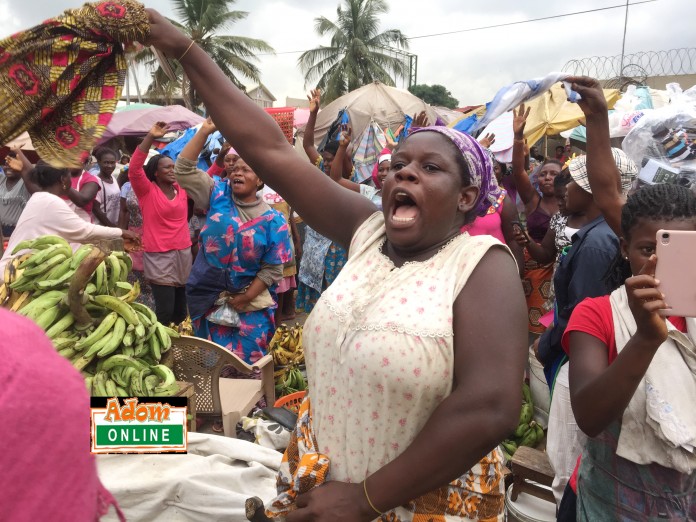 Traders at the Kumasi Central Market are threatening to boycott activities in protest of what they claim to be their relocation with no adequate accommodation arrangement.

The city authority has accused the traders of failing to move to designated areas to pave way for the second phase of the market redevelopment project.

But, the traders say they are unhappy about the planned demolition of structures
without adequate alternatives for them to trade.

Their boycott, they claim, will mean that the Kumasi Metropolitan Assembly (KMA) will lose millions of money in the form of internally generated funds, majority of which comes from the markets.

An observation in the market revealed that red polythene sheets had been tied around the roof of some shops. These were accompanied by red-marked arrows in different directions, suggesting the lanes to be affected by the next demolition.

However, traders, who were present when the markings were done, said no explanations were given.

Between the first marking and the other ones are table-top traders and those in stores, yet all of them claim no communication was done whatsoever.

“They pasted these signs two weeks ago but told us nothing. They want us to leave but no allocation has been made for us,” one of the traders explained.

Another said: “I haven’t received anything, they just marked the shops but received no information from them.

“All of a sudden, none of the satellite markets have been completed so where do they intend to take us? I for instance cannot trade on the streets because I own a store here,” another complained that the allocated area is meant for those trading on the streets.

Leadership of the traders explained the city authorities were not treating them fairly.

“We have met with them, and we are waiting for their feedbacks, but unfortunately they keep tossing us and giving excuses. We have realised they are lying to us so we just need the authority to come to our aid. We are also Ghanaians, if this happens in other regions, they go quickly to respond.”

Leadership of the traders have been going round the market to mobilise their members for a protest in the week ahead.