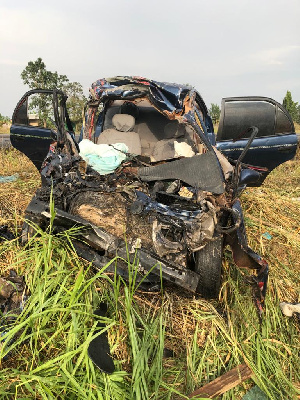 A driver of a saloon car died after his car crashed head-on with an articulated truck on the Teacher Mante New Town Community stretch of the Accra-Kumasi Highway.

The driver of the Chevrolet saloon car was trapped in a pool of blood behind the steering wheel of the mangled vehicle in an unconscious condition.

He was extricated by Police with support from other road users. He was rushed to the Nsawam government Hospital for treatment but pronounced dead on arrival. His body has been deposited at the same Hospital morgue for preservation and identification.

The Driver of the articulated vehicle Abdul Fataw,37, and his two drivers’ mates who sustained various degree of injuries were also taken to the Obregyimah Presbyterian Health Centre for treatment.

The Acting Public Relations Officer of the Eastern Regional Police Command Sergeant Francis Gomado confirmed the accident to Starr News stating that both vehicles were being towed away from the road while investigation continue.

ECOWAS countries to start charging $50 for coronavirus tests from today