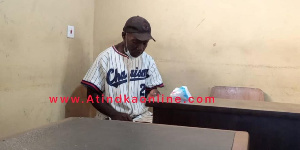 According to her, the act happens anytime she enters the suspect’s room to watch television.

She added that after every act, the suspect gives her GHS5.