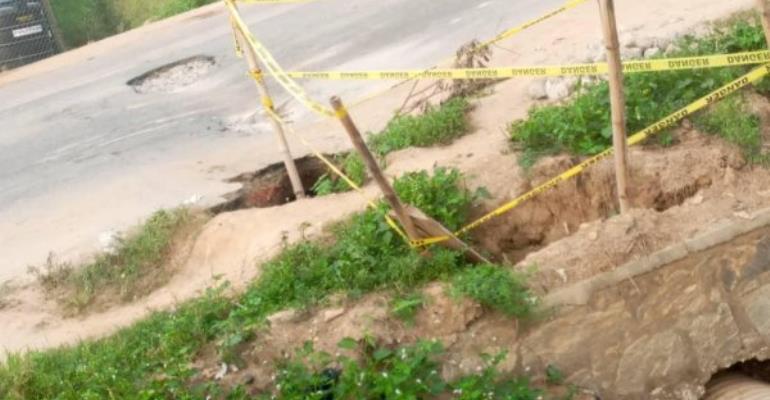 A section of the Cape Coast-Fosu-Kumasi Highway has caved in at Atonsu, near Assin Fosu in the Assin Central Municipality of the Central Region.

Residents said that section of the road had shown cracks, a sign of possible cave-in, for some years now.

The Ghana News Agency observed that a tunnel, in which a nearby stream flows into an open drain under the road, had been affected by the damage, resulting in the soil becoming soggy.

The situation has forced drivers plying the route to use only one lane of the road, creating heavy vehicular traffic.

Mr Nicholas Fiifi Baako, the Municipal Chief Executive, in an interview with the GNA, assured residents and commuters of the Assembly’s resolve to solve the problem to ease traffic.

Mr Samuel Akuoko, the Central Regional Director, Ministry of Roads and Highways, said some road contractors would soon be engaged to get the road fixed.

“We are in talks with the contractor working on the Adiembra road and he has promised to mobilise his men to site to get the broken bridge fixed. If that doesn’t work, we will get another contractor to fix it immediately,” he said.

Meet Abena, the young girl who lives at the cemetery with her boyfriend