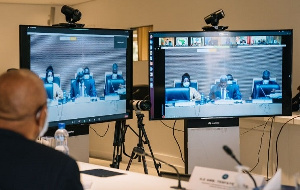 The African Union’s 34th heads of state summit kicked off today, Saturday February 6. But due to the coronavirus pandemic, leaders of the 55-member pan-African bloc are meeting virtually.

The theme of the two-day summit is “Arts, Culture and Heritage: Levers for Building the Africa We Want.”

But one of the top discussions will be on Africa’s response to the COVID-19 pandemic and how economies can overcome the damage.

While vaccination programmes have begun in some countries on the continent, such as Morocco it has been much slower in comparison to wealthier nations.

There have been over 2.6 million cases on the continent since the outbreak in February and there is a more contagious variant from South Africa that is spreading.

The summit will also take up security issues in Africa, including in the Sahel, Libya, South Sudan and Somalia.

The leaders are also expected to elect the African Union Commission’s chairperson and vote for six commissioners.

The incumbent chairperson Moussa Faki Mahamat is the sole candidate for a second and the last four-year term.

The Democratic Republic of Congo via President Felix Tshisekedi, will also take over the helm from South Africa to serve as a one-year chairmanship of the bloc.

Related Topics:AU SUMMIT
Up Next

AU summit: What are the key issues?