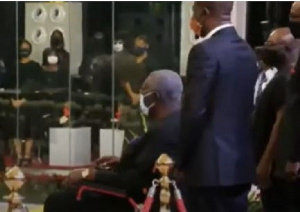 It is no secret that former presidents Jerry John Rawlings and John Agyekum Kufuor had a frosty relationship.

While they both tried in the public space do downplay suggestions of some hostility between them, their public statements were more than enough to convey such thoughts to Ghanaians.

This deep-seated spite between Rawlings and Kufuor who were the first and second presidents of the fourth republic respectively was allegedly birthed by what the late former president thought to be a persecution of his appointees by the Kufuor administration and a withdrawal of his courtesies.

Records show that the late president at any given opportunity ‘boomed’ at his successor who though silent often, on few occasions fired back.

Death, they say helps put things in perspective and remind humans of the essence of love, unity and peace.

This effect that death supposedly has on human beings appears to have caught up with former President Kufuor who despite not being in the best of conditions showed up at his funeral ceremony.

John Agyekum Kufuor showed up in a wheelchair to pay his last respect to his predecessor who will be laid to rest on Wednesday, January 27, 2021.