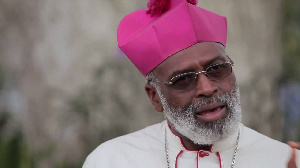 Archbishop Charles Palmer-Buckle has described the late former president, Flt. Lt. Jerry John Rawlings, as an enigma of a personality who eschewed great single-mindedness and conviction in his life.

The Catholic Metropolitan Archbishop of Cape Coast was speaking at the Catholic Requiem Mass on Sunday, January 24, 2021, organized in memory of the former president at the Holy Spirit Cathedral in Accra.

“And we are here to join all and sundry, even the entire population of Ghana, to thank God for giving us the gift of this enigma of a personality, who for decades, played his role here on the political stage of Ghana and Africa. And who did all that he was able to do and achieve from the depth of his heart and with single-minded conviction, not easy to fathom, let alone to appreciate fully,” he said.

Archbishop Charles Palmer-Buckle delivered the sermon for the service in memory of Flt. Lt. Jerry John Rawlings, who died on Thursday, November 12, 2020, at the Korle Bu Teaching Hospital.

VIDEO: We can’t have sex because we share one room with our 24-year-old daughter – Man reveals