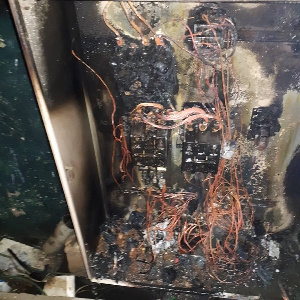 A residential apartment at Agric-Nzema in the Ashanti region has been razed down by fire in the early hours of Saturday, January 23, 2021, rendering its occupants homeless.

The fire, which started around 4 am, also burned cash believed to be running into several thousands of Ghana Cedis in the Kwadaso Municipality.

According to MyNewsGh.com, this fire brings to six, the number of fires recorded within Kumasi since the start of the year, raising concerns among residents on the possibilities these could be acts of arson.

Firefighters are reported to have taken several hours in their attempt to douse the fire, with no news of any casualties recorded.

According to Wilson Sackey, Assembly Member for the Agric-Nzema, they suspect that the fire was a result of an electrical glitch, while he appealed to the Municipal Assembly, the government, and other stakeholders to come to the aid of victims of fires in their localities.

In an interview with Pure Fm, the victims of the inferno described their uncertainties and fears about the future as all they had were destroyed by the fire.

Investigations have been initiated into the incident, the Ashanti Regional Command of the Ghana National Firer Service has said.

Chinese National who was enstooled as chief steps down