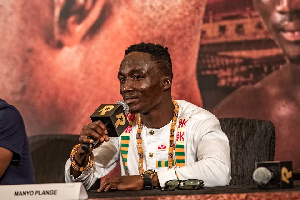 Jessie Manyo Plange who was recently voted Best Professional Boxer in Ghana 2020 by boxing journalists has set his eye on a world title belt.

With a record of no defeat in 21 victories against one draw, he is seen by many boxing experts as a star of the future and plans are advanced to get him a world title shot. He currently holds the West African Boxing Union Super Fly Title.

His manager, Tony Tolj has started negotiations by contacting Tom Brown of TBG Promotions for a showdown with Gary Antonio Russel.

Manyo Plange is now ranked by two world boxing bodies. He is number 2 on the WBA bantamweight ratings and number 9 in the WBO super flyweight division, but he feels he can beat the American who has also not lost in 18 fights.

In an exclusive interview with Tony Tolj, he was very confident that Plange will defeat Russel, and wants the fight to come on as soon as possible.

Plange is coached by Lartekwei Lartey who was also voted joint winner of the trainer of the year by the Boxing Writers Association of Ghana (BWAG).