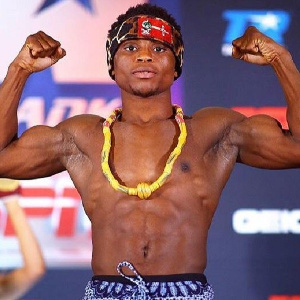 A ‘disturbing’ post by former WBO Super Bantamweight titleholder Isaac Dogboe on social media has triggered calls for help for the boxer.

Dogboe on January 16 posted via his Twitter handle that “I wait for the day I take my final breath and bid farewell to the world Folded hands… and I hope when that day comes you won’t be sad Red hearted hearted heart”.

Reactions to the tweet were calls on his father, Paul Dogboe and the Ghana Boxing Authority to as a matter of urgency intervene and provide some psychological help for Dogboe.

“Man, whatever is the cause of this feeling, just know that it has come your way because God knows and believes you can handle it. Don’t disappoint Him. Be strong and know that someone’s own is worse. You’ve got this, Champ. Fight on” one fan replied.

Dogboe, however, allayed the fears of his followers and fans in a proceeding tweet, assuring that he has no intentions of committing suicide.

“Thank you all for your concerns. First and foremost I am not going to kill myself. My tweet has a deeper meaning to it than it’s construed to be. Nonetheless, I’m grateful for the show of Love” he explained.

Reacting to the post by his son in a Peace FM interview on Thursday, January 21, 2020, Paul Dogboe suspected that his son is playing on the minds of Ghanaians.

He said that as a father, he has done his best for his son and wonders why Dogboe will consider suicide.

“A lot of people sent me that because Ghanaians like bad news but I think the kid is just playing on the minds of Ghanaians. I just didn’t understand why that tweet. This kid had it all, we gave him our best and broke our back to put him on the pedestal and made him a world champion”.