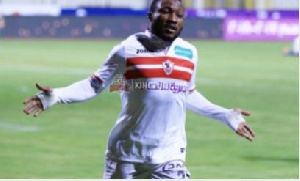 The Court of Arbitration for Sports (CAS) has ruled in favour of Benjamin Acheampong in his case against Zamalek – with the Egyptian giants expected to cough $1.2 million to the Ghanaian striker.

The international sports tribunal has doubled the figure from $ 400,000 to $ 1.2 million following a long winding legal tussle.

The former Asante Kotoko hitman has dragged the Egyptian giants to the adjudicatory chamber for the side’s refusal to honour its contractual obligations.

The striker is now hoping to overturn FIFA’s ruling at the highest court in international sport.

The Ghanaian star joined the Whites Nights in 2017 but terminated his contract after just a year over unfair treatment.

CAS has now ruled in favour of the Ghanaian- who will be smiling to the bank.

Zamalek head of media Issam Salem told Egypt-based Ontime Sports that the money originally due the Ghanaian has doubled.

“The Acheampong case is two and a half years old, and I think that the decision from the International Sports Court is final, but so far we have not received the decision yet and when we do, we will start to formally move towards this matter,” Salem said.

“The verdict that Acheampong got from FIFA was worth $ 400,000, and with no payment yet and the case continuing until it reached the Sports Court, the amount doubled until it reached $ 1.2 million, and this number is very large.”

Acheampong plied his trade with Zamalek back in 2017 but never managed to cement his position in the starting eleven and was, therefore, sent on loan before terminating his contract.

Related Topics:Ben Acheampong
Up Next