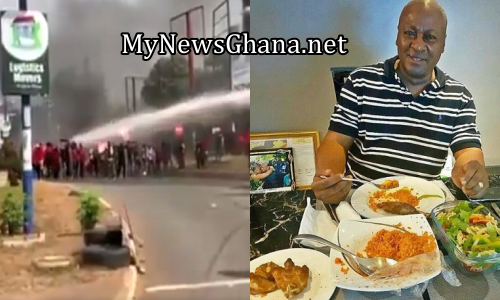 It appears enthusiasts of the National Democratic Congress (NDC) are adamant about accepting the declared presidential results that make NPP Flagbearer, Nana Addo Dankwa Akufo-Addo the president-elect in the just-ended polls.

They have consistently demonstrated this by holding protests in various parts of the country after December 9, 2020.

In Accra, there was one at the Electoral Commission’s Headquarters at Ridge on the day of the declarations, and this raised concerns about peace and security post-elections. There have been others in other places including the Volta and Northern Regions after the declaration.

As though that is not enough, they have held another, and the aggression, each time seemingly increases.

The most recent was held today, Thursday December 17, 2020, at the Electoral Commission’s Headquarters, where scores of protesters clashed with security personnel at Ridge.

With placards inscribing words including “No Mahama, No Peace”, and clad in party colors, they thronged the premises to register their displeasure, even pelting stones at points, despite the firing of rubber bullets by the police. In addition, they burnt tyres which the police had to douse.

The situation sparked chaos in the area, causing a lot of vehicular traffic. About 10 persons have so far been arrested by police, and social media users on Twitter are talking about the subject. For many, it is baffling, how party enthusiasts would want to risk their lives and that of many others, for persons who may not necessarily know them or whose family members may be protected if any chaos erupts.

Here are some of the views as compiled:

John Mahama has like 15 children or so, none of them is out there protesting for his/her father

But you Aunty Ba, is out there shouting “No Mahama No Peace”. You’re not correct

Use your mind to claim justice not weapons. Keep on protesting ‘No Mahama No Peace’ and be fighting the police. Force will be applied if they’re pushed to the wall. You’ll get injured or die in the process whilst ur political party leaders stay safe at home with their families.

This “no Mahama no peace” thing by the NDC Supporters is getting out of control. pic.twitter.com/knIbekFGCk

I know you’re busy shouting No Mahama No Peace but you just take a moment to look at this picture below. If you’ll still continue protesting after that, continue. If you die, he won’t even know pic.twitter.com/S3iZpgwHPu

Ghanafuo aso y3 din! You were the same people who helped Nigerians with ENDSARS, you saw what happened but now you’re on No Mahama No Peace?