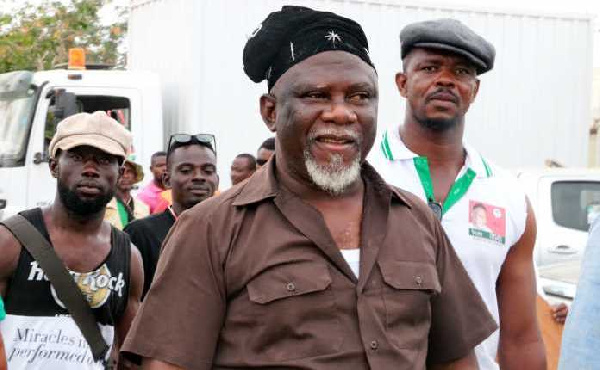 The National First Vice-Chairman for the National Democratic Congress(NDC) Sofo Awudu Azorka has used unprintable words on the Chairperson for the Electoral Commission of Ghana Madam Jean Mensa.

The Vice-Chairman uttered these words when he was speaking to the press at the Tamale Jubilee park where the NDC ended their demonstration against the electoral commission to drum home the need to declare John Dramani Mahama the legitimate winner of the 2020 elections on Wednesday, December 16, 2020.

When asked what the NDC will do if their demand for an independent audit of the results is not adhered to, Sofo Azorka who is the founder of the infamous Azorka boys said “In mother, in mother, the electoral commission in mother,” he said in a rather crackered language which is an insult to the mother of the Chairperson or the commission.

Sofo Azorka threatened that the NDC will be in Accra on January 7, 2021, to swear John Dramani Mahama in as President of the Republic of Ghana and no man born of a woman will stop that.

On his part, the NDC’s Northern Regional chairman, Alhaji Ibrahim Mobila stated that the NDC has majority in parliament and asked their supporters to disregard the figure put out by the electoral commission because some seats like Zabzugu are being contested, and will soon be theirs.