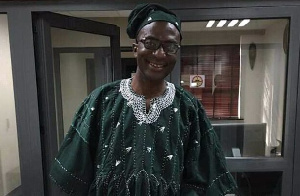 The ruling New Patriotic Party (NPP) will officially constitute the majority caucus in the 8th Parliament to be inaugurated on 7th January 2021 regardless of the outcome of the Sene West parliamentary election dispute.

This has been precipitated by the public declaration of joining the NPP side in the next parliament by the independent MP-elect for Fomena constituency, Andrews Amoako Asiamah.

“The issue regarding what side I join has been discussed already, I have said it time without number that I am a member of the NPP by blood. There is nothing that can change that” the retained MP emphasised.

Andrew Asiamah also indicated that he had some deliberations with officialdom, traditional rulers, Pastors, colleagues, party gurus and his family to let bygones be bygones of which he agreed to.

With 274 seats declared formally, the NPP will form a majority with 138 members and the opposition National Democratic Congress(NDC) having 136 members which imply that the outcome of the Sene West seat disputation has no influence in determining which party forms the majority in Parliament.