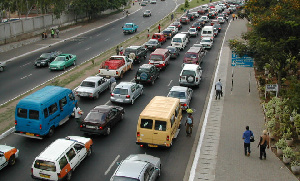 Ashanti Regional Motor Traffic and Transport Unit (MTTD), Driver and Vehicle Licensing Authority (DVLA) and the National Road Safety Authority (NRSA) are embarking on road safety Campaign dubbed “Arrive Alive’’ aimed at reducing carnage on the roads before, during and after Christmas.

The campaign seeks to sensitise road users and the public on the need to prioritise road safety ahead of the yuletide as part of efforts to reduce fatalities on the road.

In an interview with OTEC FM’s reporters Afia Kyem Agyemang and Enoba Afia Aboagyewaa on Wednesday, December 16, 2020, the Ashanti Regional Motor Traffic and Transport Department (MTTD) commander of the Ghana Police Service, Supt. Mr Emmanuel Adu Boahen said the Department envisaged that commercial drivers would attempt to make up for the lost time by increasing their number of trips in a day, which was often characterised by traffic violations.

According to Supt. Adu Boahen, the carnage on roads was attaining alarming proportions and implored road users including pedestrians to be extra careful on the road to avert needless accidents.

He said the number of lives claimed by road accidents during Christmas period was becoming higher than all other causes put together.

The Regional MTTD Commander said it was because of this that the MTTD put many activities in place to intensify road safety sensitisation among all categories of road users, especially heading towards Christmas and New Year.

“We cannot sit down unconcerned and witness another trend of road accidents claiming lives this time around and the solution to this fight is a unified front by all stakeholders with the police taking the lead,” he stated.

He assured the gathering that the police was fully prepared and ready to police the roads to ensure an accident-free period on the division’s stretch of the highway.

He advised drivers to resist the temptations of over speeding to make good sales during the yuletide and reminded them that their families and the nation needed them alive.

He said road safety was a collective responsibility of every Ghanaian.

Test driver runs over mother and daughter at Santasi