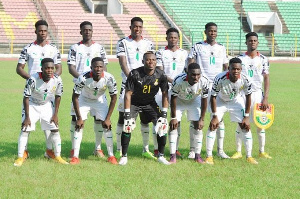 Ghana’s Black Satellites have qualified to the finals of the WAFU Zone B U-20 Championship after beating Niger in the semi-finals.

The National U-20 ensured this result by winning via penalty shootouts after the game ended barren even after extra time.

Coach Karim Zito made four changes to the squad he used for the previous game against Ivory Coast for the Niger battle.

As a result the likes of Ivan Anokye, Abanga Sumaila, Emmanuel Agyemang Duah and Daniel Afriyie Barnieh made the bench.

The two teams failed to produce a goal during normal time despite creating numerous chances.

Ghana and Niger had a go at each other but multiple factors contributed in their failure to score.

After 30 minutes of extra time, the scoreline still remained goalless hence the need for penalty shootouts.

In the shootout, Ghana recorded a perfect record; scoring all attempted kicks while Niger missed one.

David Duncan to be sacked as Black Stars assistant coach?

LIVESTREAMED: Ghana vs Niger – WAFU Zone B U-20 Championship